Lord Foster has launched proposals for the Droneport project in Africa to support cargo drone routes capable of delivering urgent and precious supplies to remote areas on a massive scale. The project is a collaboration between Redline partners led by Afrotech, École polytechnique fédérale de Lausanne (EPFL); the Norman Foster Foundation; and Foster + Partners.

Cargo drone routes have utility wherever there is a lack of roads. Just as mobile phones dispensed with landlines, cargo drones can transcend geographical barriers such as mountains, lakes, and unnavigable rivers without the need for large-scale physical infrastructure. Just a third of Africans live within two kilometres of an all-season road, and there are no continental motorways, almost no tunnels, and not enough bridges that can reach people living in far-flung areas of the continent. It would require unprecedented levels of investment in roads and railways to catch up with the exponential growth in Africa’s population, which is set to double to 2.2 billion by 2050. An ‘infrastructural leap’ is essential using drone technology and clean energy systems to surmount the challenges of the future.

The specialist drones can carry blood and life-saving supplies over 100 kilometres at minimal cost, providing an affordable alternative that can complement road-based deliveries. Two parallel networks would operate services, the Redline using smaller drones for medical and emergency supplies; and the commercial Blueline that would transport crucial larger payloads such as spare parts, electronics, and e-commerce, complementing and subsidising the Redline network.

The Droneport offers a new typology for a building which we hope will grow into a ubiquitous presence, much like petrol stations have become dispersed infrastructure for road traffic. The proposal will have a strong civic presence, based on sharing and multiple uses. It allows for safe landing of quiet drones in a densely packed area, and includes a health clinic, a digital fabrication shop, a post and courier room, and an e-commerce trading hub, allowing it to become part of local community life.

The project is an evolution of Foster + Partners’ previous experience in building airports, as well as earlier lunar building studies conducted in association with the European Space Agency. Just as the structures designed for the moon use a minimal inflatable framework and 3-D printed lunar soil, the Droneport is imagined as a ‘kit-of-parts’ where only the basic formwork and brick-press machinery is delivered to site, and the raw materials, such as clay for bricks and boulders for the foundation, are locally sourced, reducing material transport costs and making it more sustainable. The central idea is to ‘do more with less’ and the vaulted brick structure with a minimal ground footprint, can easily be put together by the local communities. Multiple vaults can also link together to form flexible spaces based on demand and needs of the particular place, and the evolution of drone technology. The Droneports will also be manufacturing centres for drones, generating employment opportunities for the local population. By giving the local people the construction knowledge, the project seeks to leave a legacy that will initiate a change that is bigger than the building itself.

The pilot project – slated to begin in 2016 – is based in Rwanda, a country whose physical and social geography poses multiple challenges for prototyping the future of the projected Redline trans-continental network. This initial plan for three buildings, to be completed by 2020, will enable the network to send supplies to 44 per cent of Rwanda. Subsequent phases of the project could see in excess of 40 Droneports across Rwanda, and the country’s central location could allow easier expansion to neighbouring countries such as Congo, saving many thousands more lives.

“Africa is a continent where the gap between the population and infrastructural growth is increasing exponentially. The dearth of terrestrial infrastructure has a direct impact on the ability to deliver life-giving supplies, indeed where something as basic as blood is not always available for timely treatment. We require immediate bold, radical solutions to address this issue. The Droneport project is about doing ‘more with less’, capitalising on the recent advancements in drone technology – something that is usually associated with war and hostilities – to make an immediate life-saving impact in Africa. Rwanda’s challenging geographical and social landscape makes it an ideal test-bed for the Droneport project. This project can have massive impact through the century and save lives immediately.”

This project is the first initiative of the Norman Foster Foundation which is currently located in Madrid.
Each year, there are 450,000 deaths due to Malaria, 25 per cent of which are attributed to a lack of blood available for treatment.
100,000 also die each year from Sickle Cell Disease, the treatment for which requires regular and safe blood transfusion.
Initially, the project will deploy 3-metre wingspan drones, capable of carrying a payload of 10kg. By 2025, there will be drones with a 6-metre wingspan, capable of carrying payloads of 100kg. 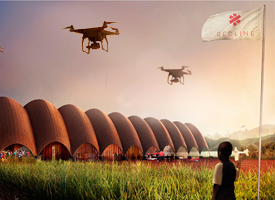 The pilot project – slated to begin in 2016 – is based in Rwanda, a country whose physical and social geography poses multiple challenges for prototyping the future of the projected Redline trans-continental network. This initial plan for three buildings, to be completed by 2020, will enable the network to send supplies to 44 percent of Rwanda. Subsequent phases of the project could see in excess of 40 Droneports across Rwanda, and the country’s central location could allow easier expansion to neighbouring countries such as Congo, saving many thousands more lives.

Are X Me make money from gaming

Due to 40% of Bulgaria population still think the Pandemic is a lie and the COVID-19 virus is overrated and not scary at all - we will witness a Second Wave for sure. Those non-believers (of tons of info coming from around the World) will flood the sea resorts and will party like there is no tomorrow. But wait ... aren't they the same people that think nothing significant is happening and everything is fine :) Why then they want to live every day like it is their last one. I think the answer is - because the aren't able to evaluate the term SOCIETY. Everyone knows the secrets of the Universe and has ultimate knowledge (that is gone if the wi-fi is disconnected), buuuut in hard times - think only about their own personal interests. All these people complaining that the Pandemic measures damaged their personal life. Like someone think to harm exactly them. Do you really think you're so important ? Yes there is a conspiracy behind this Pandemic, but the virus is real and it is killing people FOR REAL. So the solution is not to demonstrate how SMART ASS you are, but HOW SOCIAL CREATURE you are. Bulgaria has negative population growth for years and there are over 30% that are 60+ years old. And there are 2.5 million bulgarians who think COVID-19 can't cause serious numbers of deaths ... VERY "SMART".

My prediction is that the SECOND wave will start from the city of Burgas with over 100 COVID-19 cases for just a day in the first days of September. Just too many not so smart people over 60 yrs will come to the beaches and will contract the virus from all these young non-believers. The panic will be immediate which will cause the great human migration (From Burgas to Sofia). The authorities will be forced to put lockdown of the both cities. Here comes the most interesting moment - who will be blamed? Second HOAX ,really ? Why don't you think that the regular flu is HOAX too. It's because you have pills for it. It is that easy - your logic is A) I have pills for it - it is real B) i don't have pills for it - it is HOAX. And the funniest thing ever is that new conspiracy about injecting chips via the COVID vaccine. And for what ? To steal your health data ... Calm down, you are already sharing enough on Facebook and Instagram. Just think about it - if there are people with enough power to rule the world, whether they will buy information from Facebook. The simple answer is YES. And you debunk the hoax there. Isn't it too easy for those powerful people to see what to create, that will convince you the Pandemic is real. May be the cruel truth is that THEY want YOU to think THIS IS A HOAX. So IT WILL LAST LONGER and THEIR PLAN WILL SUCCEED LONGER.

I want to say something like AMIN at the end, but i'm not so religious.
I think the better words the the non-believers have to say are "I'M IN" or even bolder "ALL IN".

I’m going to tell about one of the best my summer memories. It’s trip to Italy, Sicilia.
Frankly speaking, I’m quite lazy person and from the beginning didn’t want to go there. I thought it would be boring, but then I still didn’t understand, how much silly I was.
Of course, not all journey was cheerful, but there I got such experience I’m never gonna forget. Firstly, it’s Mediterranean Sea. Come there from Baltic Sea, I could see really huge difference between them. It was really unforgettable experience for me to running after swimming in sea to bathroom. Secondly, it’s Etna. Having been there, I can definitely say, that climbing up to volcano is hard work. But climbed there, you can in fact get a picturesque view. And the last and, maybe, most enjoyable, is amusement and aqua park, named Etna Park. Even before we came, and we came very early, enormous crowd had already been there. But, of course, queues are an integral part of such parks. To be honest, I haven’t visited a lot of amazing amusement and aqua parks, but anyway I have such experience in this case. But Etna Park surpasses all my expectations. For example, one slide in aqua park is special glass cabin which shoots you into the water under 180 degrees. It’s so cool, that it’s impossible to describe it by words.
So, having been in this jorney, I can definitely say, that it absolutely exactly wasn’t in vain.

Insya allah you will always be happy