The SpaceX Falcon 9 rocket slams into the Moon. The crater of the impact reveals mysterious moon secret.

SpaceX will reach the surface of the moon a bit ahead of schedule, it turns out.

Elon Musk's company is providing the landing system for the first crewed touchdown of NASA's Artemis lunar exploration program, a milestone that the agency hopes to achieve in 2025. But a piece of SpaceX hardware will hit the gray dirt far sooner than that — in just five weeks or so.

Satellite trackers have determined that the upper stage of a SpaceX Falcon 9 rocket that launched in February 2015 will slam into the moon on March 4, Ars Technica's Eric Berger reported on Monday (Jan. 24). The observers were led by Bill Gray, who runs Project Pluto, a company that supplies software to professional and amateur astronomers.

The rocket in question launched the Deep Space Climate Observatory (DSCOVR), a joint effort of the U.S. National Oceanic and Atmospheric Administration and NASA. DSCOVR studies our planet and the space weather environment from the Earth-sun Lagrange Point 1 (L1), a gravitationally stable spot about 930,000 miles (1.5 million kilometers) from Earth in the sunward direction. (NASA's $10 billion James Webb Space Telescope just arrived at L2, which is 930,000 miles from Earth in the other direction, toward the orbit of Mars.)

SpaceX usually disposes of Falcon 9 upper stages after launch by sending them back into Earth's atmosphere for a fiery death. (SpaceX famously lands and reuses the first stages of its Falcon 9 and Falcon Heavy rockets. But the company had yet to pull off a first-stage touchdown at the time of the DSCOVR launch; the first such success came in December 2015.)

The upper stage was so high after sending DSCOVR on its way, however, that it didn't have enough fuel to return to its home planet, Berger wrote. So it's been cruising through the Earth-moon system on a long and looping orbit for nearly seven years.

Its time is now nearly up. Gray, using data gathered by a variety of fellow observers, calculated that the stage will crash into the moon on March 4 at 7:25 a.m. EST (1225 GMT). The impact will occur on the lunar farside, at about 4.93 degrees north latitude and 233.20 degrees east longitude.

"At a guess, the above prediction may be wrong by a degree or two minutes from the predicted time," Gray wrote in a blog post about the coming impact, citing the difficulty of modeling precisely how sunlight pressure moves a tumbling, cylindrical object such as a rocket stage.

"We'll need (and I am confident will get) more observations in early February to refine the prediction; that will bring the uncertainty down greatly," he added.

Because it will occur on the moon's farside, the impact won't be visible from Earth. But nailing down its time and location is still important, potentially allowing moon-orbiting spacecraft such as NASA's Lunar Reconnaissance Orbiter (LRO) and India's Chandrayaan 2 to study the resulting crater — "and, if we're lucky, maybe image the impact," Gray wrote.

"For those asking: yes, an old Falcon 9 second stage left in high orbit in 2015 is going to hit the moon on March 4. It's interesting, but not a big deal," astronomer and satellite tracker Jonathan McDowell, of the Harvard-Smithsonian Center for Astrophysics in Cambridge, Massachusetts, wrote via Twitter on Tuesday (Jan. 25).

Objects "left in cislunar orbit are unstable — will eventually either hit the moon or the Earth or get perturbed to solar orbit," he added in another tweet. ("Cislunar" refers to the region between the Earth and moon.)

The upcoming impact will be the "first example of a Regolith Unplanned Disassembly if orbital dynamics holds true," SpaceX principal integration engineer John Insprucker tweeted on Monday, invoking the RUD acronym that Musk often uses to describe the destruction — or "rapid unplanned disassembly" — of a rocket during testing here on Earth.

Insprucker, who hosts many of SpaceX's launch webcasts, clarified in a subsequent tweet that the upcoming impact will be the first lunar RUD for the company, not the first one overall. Indeed, many spacecraft have slammed into the moon unintentionally over the years. In 2019, for example, Israel's Beresheet probe and the Chandrayaan 2 lander both crashed during their lunar touchdown attempts.

The Falcon 9 upper stage won't be the first rocket body to hit the moon, either. NASA steered the upper stages of multiple Saturn V rockets into the moon during the Apollo program, for instance. And in 2009, the agency intentionally crashed the upper stage of the Atlas V rocket that launched LRO into a crater at the moon's south pole.

The resulting impact blasted out significant amounts of water ice, suggesting that this resource is plentiful in the moon's polar regions.

The Falcon 9 stage is headed for a relatively boring (by comparison) part of the moon, Gray wrote. But its impact could still yield interesting insights about lunar geology.

"We know the mass of an empty Falcon 9 booster [about 4 tons] and that it will hit at 2.58 km/s [5,700 mph, or 9,290 kph]; the known momentum and energy of the object making the crater ought to help in calibrating the crater size vs. energy function," Gray wrote.

The ellipsis... ending with an exclamation mark!

At this day the little e. became а capital one. At this day the long term ellipsis between e. and s. was filled with letters ...n ...d ... l...e...s :.. the distance now seems to be endless but there was one sweet sweet unforgettable unique exclamation mark, that e. will always remember. Thank you s. , i wish you the biggest luck, which will transform every your question mark into colon, followed by a nicely curved bracket :) Thank you for all the little stars and pluses, that made this 4 years in school with you - an cosy, soft and soul-cuddling dream. Thank you for everything, i will always love you <3 and remember - on the other side of the dash there will be always an E. ready to hElp when you nEEd :)

I want to open my own business,about pc (personal computer) and take orders. I wanna have a big flat in Europe(france,the czech republic,germany or in any scandinavian country ).I think that i will pass OGE/EGE(exams) and enter the university.

We are creating a blueprint for a single train design that will be rolled out across the Piccadilly, Central, Bakerloo and Waterloo & City lines, allowing us to create more efficient procurement and long-term maintenance procedures.
250 new Tube trains

Around two-thirds of our lines are currently being or have been upgraded. We also have a programme of work under way to increase frequencies on upgraded lines even further.
More reliable service

As part of our ongoing investment in the Underground network and to meet the needs of London's rapidly growing population, we are continuing to invest in and improve our services.

By introducing new modern signalling systems and new trains on the Bakerloo, Central, Piccadilly and Waterloo & City lines, delays due to signal and train failures will be reduced.

Additionally, over the course of time we will also be introducing platform edge doors where possible (as used on the Jubilee line), helping to ensure customer safety and reducing delays due to litter and other obstructions on the tracks.
Meeting London's growing demand

London's population is set to increase from 8.4 million today to around 10 million by 2030. The new modern signalling systems and new trains we're introducing will increase capacity to help us meet this challenge.

60% more capacity (the equivalent of up to 19,000 customers per hour) The Piccadilly line currently serves 210 million customers a year and demand is expected to grow 20% by 2020. The Piccadilly line has therefore been prioritised as the first of the four lines to benefit from the new trains and signalling system. 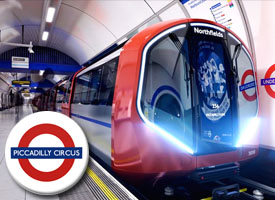 Why SWOT?
The SWOT mission brings together two communities focused on a better understanding of the world's oceans and its terrestrial surface waters. U.S. and French oceanographers and hydrologists and international partners have joined forces to develop this satellite mission to make the first global survey of Earth's surface water, observe the fine details of the ocean's surface topography, and measure how water bodies change over time.

Mission Development Timeline
SWOT was one of 15 missions listed in the 2007 National Research Council Decadal Survey of Earth science missions that NASA should implement in the subsequent decade (full report available here). In its earliest stages, the mission underwent Concept Studies (Pre-Phase A) and Concept & Technology Development (Phase A).

To learn more about SWOT's latest progress towards launch, visit the Flight Systems and Ground Systems pages. To learn about the airborne instrument making measurements similar to those that will be made in space by SWOT to prepare for the hydrology post-launch Cal/Val, visit the AirSWOT page.

SWOT will launch in Phase D. Approximately the first six months after launch, it will be in a "fast-sampling" phase with a 1-day repeat orbit at an altitude of 857 km (532.5 mi). This initial period will focus on achieving calibration and validation objectives while studying rapidly changing phenomena. Members of the international ocean science community may participate in this phase by creating programs to deploy in situ assets in the regions covered by the SWOT fast-sampling orbit. This will provide a global series of experiments with fine-scale ocean campaigns, as well as ground-based data for comparison with SWOT's daily 2-D sea surface height data. The fast-sampling phase will end with an increase in the observatory's altitude to 891 km (553.6 mi).

Phase E (Operations & Sustainment), nominally lasting three years, will have a 21-day repeat orbit to balance global coverage and frequent sampling. This non-sun-synchronous orbit was chosen to minimize tidal aliasing and ensure coverage of major water bodies on land. SWOT's 120-km-wide (~75-mi-wide) swath will result in overlapping measurements over most of the globe with an average revisit time of 11 days.

SWOT Project Mission Performance and Error Budget
(2017) This document presents the top-down error budget for the SWOT mission and its ability to meet the scientific requirements. It includes all of the different systems and subsystems that have a significant contribution to the overall performance of the mission.

SWOT Science Requirements Document
(2018) The SWOT mission is a partnership between two communities, physical oceanography and hydrology, to share high vertical accuracy and high spatial resolution topography data produced by payload configuration for making swath measurement of the elevation of land surface water and ocean surface topography. This document summarizes the scientific objectives for each community.

SWOT Mission Science Document
(2012) This document summarizes the findings from meetings of the SWOT Science Working Group (SWG) with a purpose to provide information on the potential opportunities in science investigation and applications as well as on the preliminary design of the SWOT mission concept. 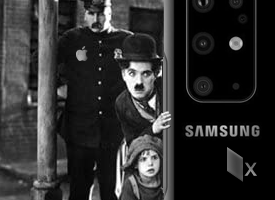 Samsung releases Vert-X: the first ever smartphone with camera able to "see" around corners

While thoughts of Big Brother watching you might immediately spring to mind, the technology doesn't have to have such a dystopian purpose.

It could, for example, help self-driving cars avoid accidents, or improve the navigation skills of autonomous robots working in disaster areas.Or this is supposed to solve the problem of the last decade "Selfie with visible phone in it"

Dear future world, 10 years ago I've sent this letter on this website. I'm not sure where I'll be 10 years from now. But I hope and pray that God would guide me to realize my dreams. Through him everything is possible.