NASA launches Lucy The Trojan asteroid-hunter. It will survey fossils of planet formation, from the early days of our solar system

Time capsules from the birth of our Solar System more than 4 billion years ago, the swarms of Trojan asteroids associated with Jupiter are thought to be remnants of the primordial material that formed the outer planets. The Trojans orbit the Sun in two loose groups, with one group leading ahead of Jupiter in its path, the other trailing behind. Clustered around the two Lagrange points equidistant from the Sun and Jupiter, the Trojans are stabilized by the Sun and its largest planet in a gravitational balancing act. These primitive bodies hold vital clues to deciphering the history of the solar system, and perhaps even the origins of organic material on Earth.

Lucy will be the first space mission to study the Trojans. The mission takes its name from the fossilized human ancestor (called “Lucy” by her discoverers) whose skeleton provided unique insight into humanity's evolution. Likewise, the Lucy mission will revolutionize our knowledge of planetary origins and the formation of the solar system.

Lucy will launch in October 2021 and, with boosts from Earth's gravity, will complete a 12-year journey to eight different asteroids — a Main Belt asteroid and seven Trojans, four of which are members of “two-for-the-price-of-one” binary systems. Lucy’s complex path will take it to both clusters of Trojans and give us our first close-up view of all three major types of bodies in the swarms (so-called C-, P- and D-types).

The dark-red P- and D-type Trojans resemble those found in the Kuiper Belt of icy bodies that extends beyond the orbit of Neptune. The C-types are found mostly in the outer parts of the Main Belt of asteroids, between Mars and Jupiter. All of the Trojans are thought to be abundant in dark carbon compounds. Below an insulating blanket of dust, they are probably rich in water and other volatile substances.

No other space mission in history has been launched to as many different destinations in independent orbits around our sun. Lucy will show us, for the first time, the diversity of the primordial bodies that built the planets. Lucy’s discoveries will open new insights into the origins of our Earth and ourselves.

The food of the future: Soylent is considered the global solution to malnourishment

Feeding 9 billion people in 2050 is one of the planet’s priority concerns at the minute, and this includes getting proper nutrition to the already-existing 850 million malnourished people. According to Rob, the creator of Soylent,

Hank Pellissier thought bringing Soylent to malnourished and undernourished populations over a period of two weeks could help them get the missing nutrients they need. He wanted to send 2 tones of Soylent to 140 Mangyan children, who live in the Mindoro Island in the Philippines.

He has been involved with these villagers for over a decade. He’s already tried to establish chicken farming in order to provide villagers with a proper source of protein. He asked Soylent to donate food to the Philippines, and sought out the people from DIY at powderedfoods.com when Soylent refused. A kickstarter campaign was launched to raise $5000 for needed materials and shipping fees.

Pellissier isn’t advocating Soylent as a way of replacing food completely for the villagers, but rather as a form of supplement, to get the protein they need:

“The kids’ diet is very starchy, based on cassava and tubers, sweet potatoes and lacks protein. Everyone there has TB, which spreads amongst people with a weakened diet, particularly one low in protein. I think the powdered foods will give them this protein”

First of all, he’s not sure whether the villagers would be willing to replace some meals with Soylent:

“Maybe they’ll be a little resistant. I had a hard time getting them to take the de-worming medicine.”

Second, a dietitian for the Association of UK Dietitians, Mariette Abrahams was also sceptical about this switch. For example, she underlined that if they used unsafe water, it could worsen their situation. She also mentioned the risk for refeeding syndrome, which is a potential reaction to the sudden introduction of food, after a long period of starvation. And this could potentially be fatal because this powder is so nutritious, and that could lead to biochemical shifts.

Others argue that powdered food can never replace the benefits of fresh seasonal foods, and that there are still loads we don’t know about the nutrients in foods.

On a different note, this is what Rob Rhinehart, creator of Soylent has to say about Soylent and the developing world:

“I’m very optimistic at the prospect of helping developing nations. Soylent can largely be produced from the products of local agriculture, and at scale is plenty cheap to nourish even the most impoverished individuals. Also, agriculture has a huge impact on the environment and this diet vastly reduces one’s use of it.”

So maybe once Soylent is further developed and safe to use (read why we’re still a bit sceptical here), this new technology can be used to feed the developing world and solve diseases linked to malnourishment! 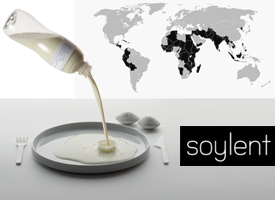 The food of the future: Soylent is considered the global solution to malnourishment

The future of food is not the return to an agrarian society but the transcendence of it. In time Soylent will be synthesized directly from light, water, and air with designer microorganisms. Genetic engineering to enhance our microbiome, and eventually ourselves. I don’t know who was the first farmer, but I want to be the last. We will make food so cheap only the rich will cook. This new technology can be used to feed the developing world and solve diseases linked to malnourishment!

The Apple Watch SE offers the best combination of style, message handling, activity tracking, app selection, and battery life of any smartwatch for any platform. It comes in two body sizes—40 mm and 44 mm—with larger screens than on previous Apple Watches in similarly sized bodies. It’s noticeably faster at running apps than the still-available Apple Watch Series 3. The base model costs 30% less than the also just-released Apple Watch Series 6, and you can choose a configuration with LTE connectivity for a $50 premium, half of what that feature costs on other Apple Watch models. The Apple Watch SE is missing some features from the more premium model, such as an always-on display, blood oxygen measurement, ECG, and different (read: more expensive) case materials, all of which are nice to have but not essential.

in 2021 i whant to the covid finsh to i travel for a lote o of places
in the word.

IPad Pro 2020, released by Apple in the year 2020, it is very practical for university students as it has very good features and new programs also there are three cameras in the iPad that it helps photographers a lot also you can buy a keyboard as it makes the iPad like a laptop This is really beautiful also iPad supports the digital pen enjoy The tablet has the largest screens in the world of tablets and smartphones. The disadvantages of the iPad are that it does not come with a separate headphone input as well. The iPad is not water and dust resistant and is also very heavy. This is all about iPad Pro 2020.

Hello, please read to the end iI know it looks like a drag but it's you writing from the heart. Today is October 1 and you were supposed to be doing science homework but you weren't it's been 3 weeks since school started and you have gotten in touch with all your friends Jackson, Abby, Kento, Allan, and Ashley. I would have liked to send you this for graduation but I'm afraid you will forget or give up on our dream right now. I'm listening to turning page of the twilight soundtrack so I am a bit emotional, anyway, I want to become an idol I know it's far fetched but I really really want to do that and get on the stage and make tons of people be happy like how my idols make me feel good so I'm hoping that when you get this you did not give up because it is the first dream job you've really had and thought of realistically. I know it's gonna be tough if I really go for it but I will really like to at least try and right now I'm on the verge of tears because I really want it to happen but it looks impossible but I don't want to give up. sorry I just when to cry to the bathroom I know right now I feel ridiculous writing that down but I hope you take these feelings seriously when you get this because it was you just one year before. one of the things that make this seem impossible is how I feel like mom is not taking it seriously while I'm dead serious. Right now my plan is to spend the next 4 high school years learning Korean, and get some singing and dancing classes so once I'm out of high school I have a bigger chance of getting to my dream. just thinking about it gets me excited of course if I could I would go right now but my parent would choke and disown me so instead of weeping these four years I'll make them useful. the reason I don't want to give up on this is that we always wanted to become a paleontologist but then we grew up and well it wasn't efficient anymore so we started to say we wanted to be an engineer like dad but that's just because the job is efficient and this pandemic proved it so this dream I have right now is important because while other kids are always wanting to be 20 different things this is the second dream job you have actually taken seriously. well honestly I don't know what to say anymore just that right now I just pray that you did not give up and are doing great this message just gave inspiration so I will practice Korean later. If I could I would make you swear to me that you won't give up because just the thought of it is making me cry and I hate people that make others cry so just remember life is hard but you shouldn't give up because of that so keep going and follow your dreams after all its the one I'm sure right now that will bring out the human in you and all those emotions that come with it. I think this can bring out a you you will have never imagined before and that drive will get you places so please don't give up. PLUS ULTRA.(I'm sending this October 2 cause I accidentally sealed it for one day jijiji)

The Covid vaccine doesn't work as good against a mutated version